There is an episode of the animated television show The Simpsons, where one of the characters gets himself into a lot of trouble for making a series of unintentionally disparaging remarks about the achievement of a woman. That character, Principal Skinner, the head of the elementary or primary school is trying to praise a past student, who has returned to her hometown as director of a stage show.

Each remark, is interpreted as sexist, until Skinner is seen begging anyone to “just tell me what I need to say to make it all go away”.

I kept running that through my head when trying to write this post on gender issues. Was I saying the right thing, or was I about to drop myself in it, saying something inadvertently wrong.

The point here is how complicated the whole issue can be (warning – potential dumb, Skinner-style comment following). The cause of at least some of that complexity is the differing circumstances of women in the developing world, particularly those who run smallholder farms, particularly when viewed from the lens of the expectations and realities surrounding equality in the developing world.

And the reality is that the majority of the 500 million or so smallholder farms in the developing world are run by women.

What's in a definition - food security

When you work on food security all the time it is easy to forget that not everyone immediately understands the term.

So how best to define food security?

Global, national, regional, community or even household; any definition of food security must centre on individuals.

The World Food Summit of 1996, called by the Food and Agriculture Organization of the United Nations (FAO), defined “Food security, at the individual, household, national, regional and global levels [is achieved] when all people, at all times, have physical and economic access to sufficient, safe and nutritious food to meet their dietary needs and food preferences for an active and healthy life”.

This definition was again refined in the 2002 report, The State of Food Insecurity 2001:


“Food security [is] a situation that exists when all people, at all times, have physical, social and economic access to sufficient, safe and nutritious food that meets their dietary needs and food preferences for an active and healthy life”

Thirty years, but still a long row to hoe

This month heralds 30 years of ACIAR.

The Centre was announced in 1981. This was the year the Prince of Wales and Lady Diana Spencer wedded, France abolished capital punishment, Muhammad Ali fought his last fight, and the computer game Donkey Kong was first released.

The following year, on the third day of June, the Centre was formally established by the passing of the Australian Centre for International Agricultural Research Act 1982.

Read more »
Posted by Unknown at 16:42 No comments: Links to this post 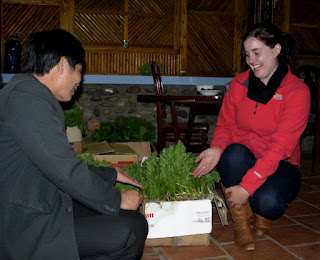 Armed with a Masters degree in agricultural business from the University of Adelaide, Rebecca McBride recently spent 12 months working in north-west Vietnam as an Australian Youth Ambassador for Development.

Rebecca was engaged as an agricultural marketing officer on an ACIAR project that is helping women from often poor families in the north-west highlands to grow and market local indigenous vegetables in rapidly transforming markets.

Read more »
Posted by Unknown at 09:46 No comments: Links to this post

Get social with ACIAR