Clowning around in Laos

By Camilla Vote and Tamara Jackson


What do you get when you cross clowns, magic and agricultural research?  A fantastic show for school students that is engaging, funny and informative all at the same time.
Lao university students, supported by ACIAR Events Funding, developed a light-hearted, humorous education program which they performed to over a thousand school students in Champassak Province, southern Laos.
The program aimed to teach young people about integrated farming systems, to diversify smallholder livelihoods and income streams.  “Clowning” and magic captured the imagination of children and youths, who are the ‘agents of change’ and the future of agriculture.  They are seldom involved in research or agricultural extension, but still spread information and make decisions.  Members of the broader community—farmers, traders, village chiefs, millers, Government and non-Government technical staff—also attended. 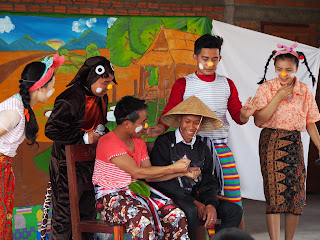 A team of amateur theatrical performers realised the concept In consultation with Australian and Laotian researchers of past and present ACIAR-funded initiatives in Laos (SMCN/2012/071 , CSE/2014/086 and CSE/2009/004).  The team consisted of six students from the National University of Laos whose disciplines included political science, community and rural development, and environmental science.  Mr Barney Chittick, aid and development specialist, guided the development of the program based on his experience with similar events in Timor Leste.


Despite its light-hearted approach, the show conveyed the key messages from project activities.  These included integrated crop-livestock systems (CSE/2014/086 & CSE/2009/004) and how to overcome obstacles to soil and water management to grow enable dry season, non-rice crops in the rice-growing lowlands (SMCN/2012/071 & CSE/2009/004).  The performance also contained messages about water and fertiliser management, animal feed sources (residues and forages), mechanised dry direct seeding, and how to manage weeds.
The show told a story about two farming households (and one lazy buffalo), who showed each other how they could improve their farming systems through better managing inputs and diversifying and integrating crop and livestock systems.
A Q&A session at the end of the performance, led by the clowns, showed that the school students easily understood the performance’s messages.  Local technical staff conducted a short electronic survey after the show to gauge the performance as both an entertainment and an information package.  Results will help team members to design future programs.
Further monitoring and evaluation of the event series will include a follow-up with students and their families to explore if and how they communicated the story to others.


Pooling resources from different initiatives highlighted synergies between research interests.  Projects and disciplines should share information to make research for development and training/extension efforts in-country more effective.
In addition to ACIAR’s financial support, Charles Sturt University, the National Agriculture and Forestry Research Institute (NAFRI) and the Crawford Fund made technical and in-kind contributions, which helped to identify and refine common messages.  Local LIZ staff introduced the concept of financial literacy, developed through the DFAT-funded Social Protection and Sustainable Livelihoods (SPSL) project.  Local staff from the NGO World Concern filmed the performances and will work with local youth to edit the film, which will be published on YouTube.  There are also plans to broadcast the project on national television.
The Events Funding also benefited the performers themselves.  As theatre ‘newbies’, they learnt valuable skills that they can apply to their own disciplines.  They trained and refined their craft, and formed a group (Maya Ha Hey) that will make funny and informative educational productions.  The group is young, enthusiastic, professional, and – importantly – very, very funny.  Performing provides a potential income for the group, and the event highlighted how theatre can effectively disseminate project outputs and engage with youth.
Posted by Unknown at 13:32 No comments: Links to this post

Making the most of mungbeans


Last Tuesday, nearly 100 growers and advisers got the chance to see and taste improved strains of mungbean, a valuable but vulnerable crop, at the Mungbean Industry Field Day in Warwick, Queensland.

Mungbean (vigna radiata) is an important food and cash crop for South Asia’s rice-based farming systems, and has become an important export crop in Australia over the last twenty years.  Asian smallholder farmers can earn money growing this nutrient-rich food which is fast and easy to grow, in demand across the world, and increases their soil fertility.
However, there has been little attempt to improve the crop, and its narrow genetic base makes it vulnerable to mungbean yellow mosaic virus and other killers.


Now Australia and Asian countries are working together to improve the crop’s resistance to pests, diseases, and seasonal variability, in a four-year initiative funded by the Australian Centre for International Agricultural Research (ACIAR).

The Mungbean Improvement Network (IMIN), a collaboration between the World Vegetable Center in Hyderabad (India) and its international partners, will breed new mungbean lines with the hope of improving production.

Breeder Col Douglas presented new varieties of the crop to the attendees at the Queensland event, organised by the Australian Mungbean Association, the Queensland Department of Agriculture and Fisheries, Pulse Australia and the Grains Research and Development Corporation (GRDC).

Douglas and other researchers in Australia and its partner countries Myanmar, Bangladesh and India grow the same experimental varieties of mungbeans.

Researchers in the four countries plant the same test rows, and study how different local conditions (including soil, water, light and pests) affect the crop.  This material will then be used to breed the varieties of the future.

“It is an enormous level of diversity,” said Dr. Huttner, “and the sum will be greater than the parts.  This is what ACIAR projects should do: in a context of mutual benefit, serve as an archetype of scientific collaboration over borders.”
Posted by Unknown at 15:07 No comments: Links to this post

Get social with ACIAR